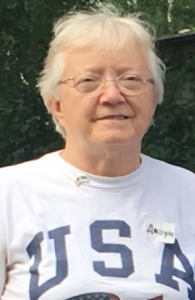 Joan Neitz Althaus quietly went to be with her heavenly father on December 22, 2022 at 3:20PM at her home in Marietta, Georgia.

Joan was born on January 9,1945 in Findlay, Ohio.  She is survived by one brother, Robert Neitz and sister-in-law, Bonnie Neitz and a community of friends who have grown to know and love her.  From a young age Joan knew that she wanted to be a follower of Jesus and she wanted to go into medicine to help the sick and wounded of the world.  After completing her nursing degree, Joan joined the US Army where she attained the rank of Captain and served honorably in the US Army Medical Corps during the Vietnam Conflict.  Joan was a member of Mt Bethel Church, Marietta, Georgia and through a Global Mission Meeting at Mt Bethel Church, Joan became interested in Mt Bethel Church’s missions to Estonia.  She served in Estonia on many of the Mt Bethel Estonia Mission trips and was a member of Friends of Estonia.  Joan also put her love for the children of the world with her desire to see the former Soviet Republics know Christ and served as a missionary in Kazakhstan for four years through The Mission Society.

Joan was an amazing missionary, friend and prayer partner.  She had a heart for people and a heart for God’s Word.  Service will be at Mt Bethel Church in January.

In lieu of flowers the family has requested donations be sent to Mt. Bethel Church designated for Estonia Missions.

Read more
Donate Now
We use cookies to ensure that we give you the best experience on our website. If you continue to use this site we will make note that you find this acceptable.Ok