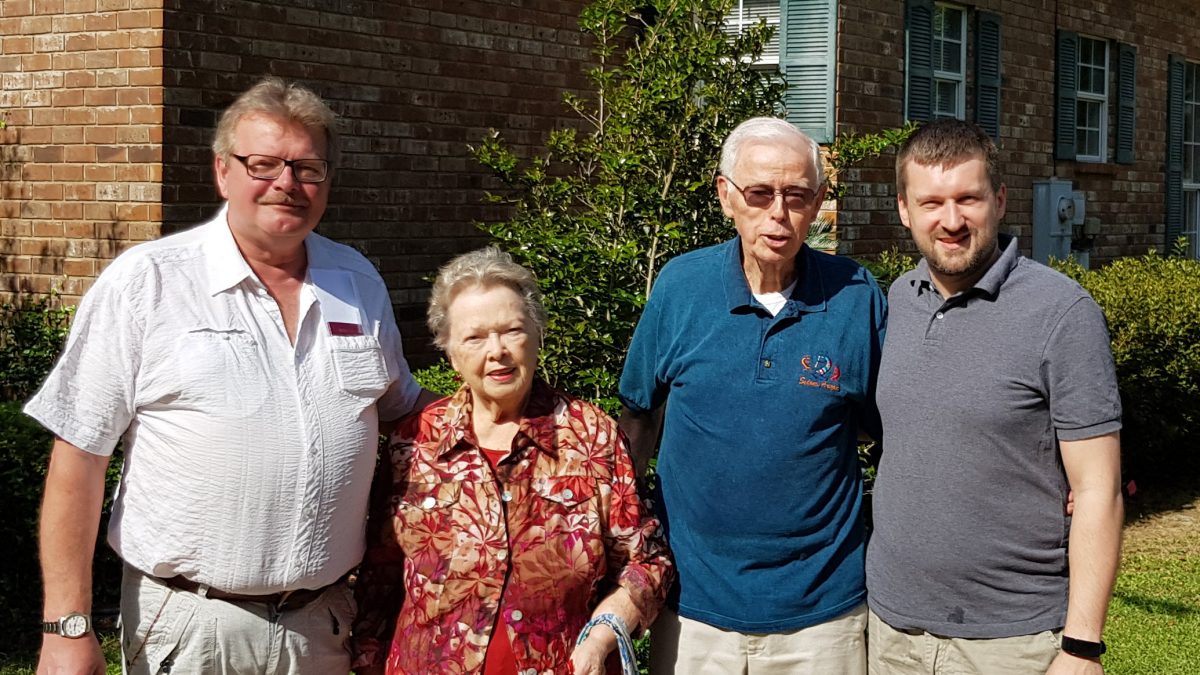 pictured above with Artur Pold and Robert Tšerenkov

On August 14th, 2020, Marjorie Greenough went to be with the Lord, and less than three months later she was joined by her husband, Rev. Earl Greenough. We are saddened by our loss of two wonderful people, we rejoice in their lives of service, love, and grace. Below are tributes provided by two members of our connection who knew and loved them well. You can share your tribute with admin@friendsofestonia.org

Earl and Margie – They were a great team in life and ministry. 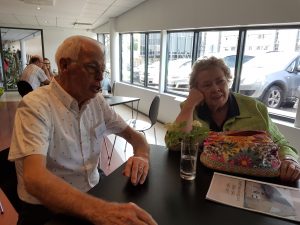 Earl and Margie at the Baltic Mission Center

Earl and Margie were some of the early attendees at Friends of Estonia meetings and Earl served on the leadership team for many years. The many miles they drove to get to the meetings were a testament to their commitment to the ministry in Estonia.

Their love for Camp Gideon and Artur Pold was inspiring and very helpful as they introduced many others to share in support of the camp.  Earl was a staunch advocate for Artur in every meeting.

They also “adopted Robert Tscherenkov when he was a student at ORU in Tulsa.  They were very constant in their support of him.  He became another child to them and they would always make sure they were present for any visit he made to the States.

They made many trips to Estonia with teams and to attend seminary graduations.  On one of those trips their luggage never arrived so Margie had to shop not only for replacement clothes but suitcases too.  She did this with such a great attitude – it was just part of the adventure.

Earl’s southern drawl endeared him to many and he always had a positive attitude. He had so many stories to tell and always left us with a chuckle.  Margie always had a smile and something fun to share.  It was evident from her Facebook site that she maintained this great attitude during her battle with cancer.  When she was too sick to have chemo she always had a fun quip about it.   She was so proud of her grandchildren and did so much with them even during her battle.

They will be missed so very much but it does seem consistent with their life that he would join Margie in heaven so soon after her death – they were ALWAYS together! 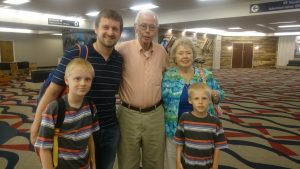 Robert and sons with Greenoughs

Earl and Margie Greenough were our dear friends, and we were greatly blessed by their love for us personally and their great love for the Methodist church in Estonia.  They made some 20 mission trips to Estonia starting in the mid-1990s when Estonia had just regained its independence and there were many needs.  Their main focus became Camp Gideon, where almost every summer they led a group of Volunteers in Mission to help rebuild the camp.  They were also very active in supporting the construction of the Baltic Mission Center (the building of the Tallinn Methodist church and the seminary) and they were actively involved with Friends of Estonia and its different projects.

Earl’s enthusiasm for the work of God in Estonia was contagious.  He was constantly telling people about Estonia and inviting people to join him in the ministry there.  His eyes would light up whenever He talked about what the Lord was doing over here.

They were our personal friends as well.  I believe it was 1996 when I first met them in the United States when they hosted a group of young people from Estonia in their church in Pascagoula, Mississippi.  The next year, Earl and Margie, together with their congregation, decided to sponsor my studies at Oral Roberts University in the United States of America.  Since Earl and Margie had become such dear friends to my wife and I, and such a significant part of our story, we asked Earl to officiate our wedding.

After I concluded my studies and moved back to Estonia, Earl and his congregation continued supporting me and the Tallinn Russian-speaking congregation.  With their support, we were able to buy the first video projector that we used for worship, and the drum set that we still use to this day.  I have had the privilege of preaching in his church in Pascagoula many times over the years, where I was always very warmly received.  Whenever I visited, Earl and Margie welcomed me into their home and showed me true Southern hospitality.  I remember many heart-felt conversations with Earl as he shared about things he had learned in ministry and I still remember many of those things to this very day.  My wife especially remembers the peace and trust in the Lord that they showed after losing almost all of their possessions in Hurricane Katrina.  Margie shared her wisdom: “Don’t cry over something that can’t cry over you.” This showed us where this wonderful couple had truly stored up their treasure.  It was also very impressive how Earl did not slow down after his retirement, but continued to preach in different churches whenever he had the chance, served with Chrysalis ministry in prisons, and kept leading mission trips to Estonia with Margie.

The last time they were in Estonia was in June 2017 for the Friends of Estonia meeting and seminary graduation.  They were both getting frailer, but there was still a great passion for the ministry in Estonia. I had the privilege of taking them to camp to see the progress on one of the buildings that Earl had really wanted to see completed. He said, “I pray that when the good Lord takes me from this earth, He will let me fly by the camp to see how things are going.”  The last time I got to see Earl and Margie was last year when Pastor Artur and I made a special trip to see them before the Friends of Estonia meeting in Atlanta.  Margie had already been struggling for some time with her health, but they received Artur and I into their home with the same love and generous hospitality.  Sadly, we were unable to visit them this year due to the pandemic. 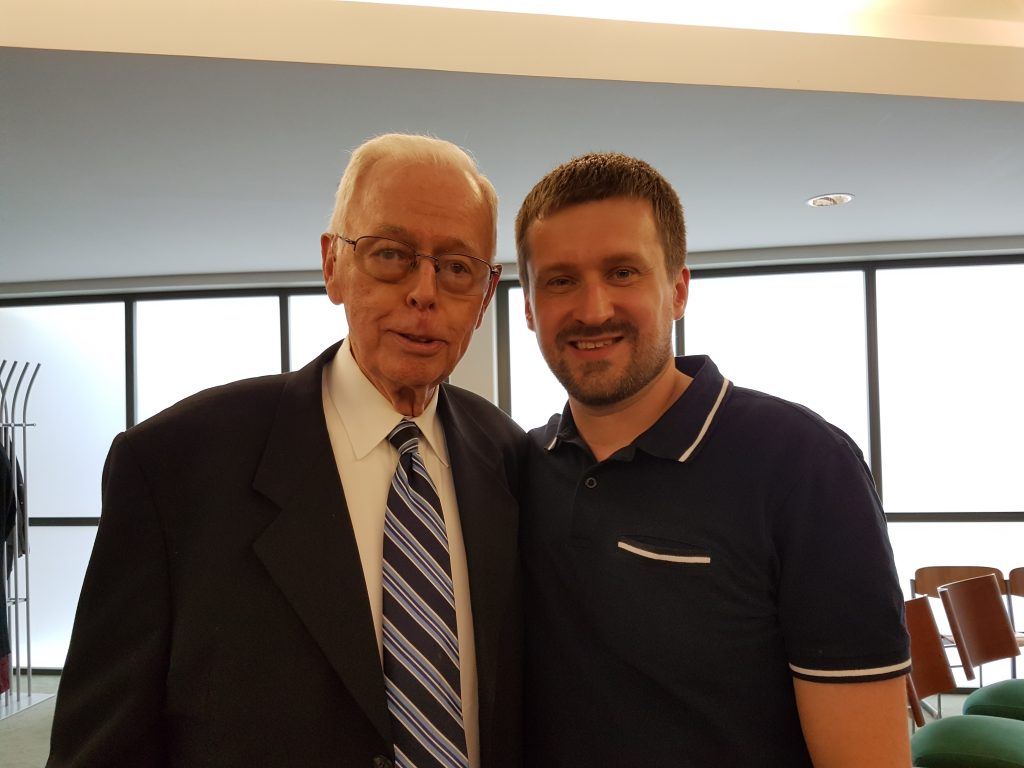 During my last conversation with Earl, when I called him on his birthday, he shared with me about his last days with his beloved wife, Margie.  A few days before she passed away, she had a song in her heart and Earl sang it with her – It is well with my soul.  When they finished singing, Margie got very quiet and said, “It is well with my soul.”  May God grant us all grace that it would be well with our soul when it is our time to go.

I know our lives would not be the same if we had not met this wonderful couple, Earl and Margie Greenough. Until we meet again in heaven!