The following Testimony is from Meeli Tankler, a member of Pärnu Agape Church, author, and former Rector of the Baltic Methodist Theological Seminary.

I grew up in a Christian home, and from an early age, I attended Kalju Baptist Church every Sunday, together with my parents. When I turned 15, I entered a typical teenager rebel phase where the borders of being a Christian felt very restricting. However, as I was a person who was used to analyzing and thinking about faith, I couldn’t just put all the borders aside. I had to find proof for myself that God doesn’t actually exist. I had always prayed before important things, and I decided that I wouldn’t pray before a very important exam. I was convinced that if God really existed and I didn’t pray, He wouldn’t let me do well at the exam. But it went really well, and that led me to a very logical conclusion that there is no God. Everything that followed was easy – I stopped going to church, stopped singing in a church choir, and ended all my relationships with Christian friends. My parents were sad but didn’t pressure me. However, I somehow knew that they were still praying for me. 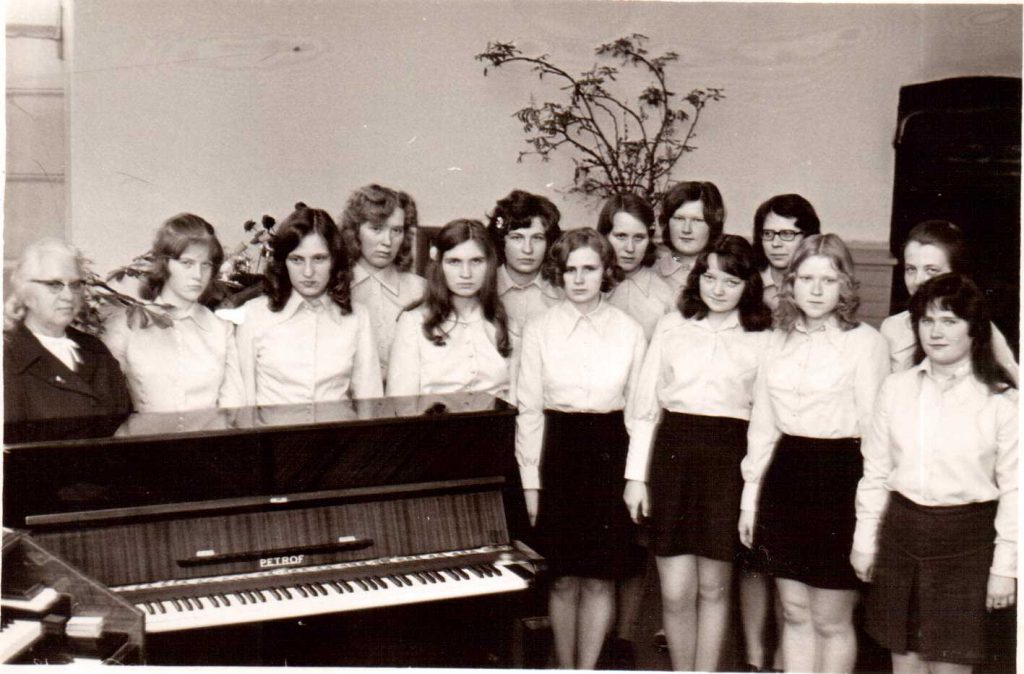 Meeli is the fourth on the left in the front row.

About a year and a half passed, and one of my previous Christian friends invited me to their birthday party. I decided to go as to prove to all of them that I had become immune to all of that believers’ topic. There was a lot of singing at that party and, as I have always enjoyed singing, I agreed to “help my friends out” and join them singing at a youth evening at Nõmme Baptist Church, planned for the following evening. While we were drinking tea at the youth evening, my friends had organized things in a way that a young man called Vello, a member of that congregation, would sit next to me, and he picked up a debate trying to prove God’s existence to me. I, on the other hand, felt it was necessary to defend my points of view at all costs. At one point, that nice young man just had to give up, and he left my side.

I don’t really remember much else from that youth evening because I continued that debate inside of me, even though it had slightly changed by then. I was forced to honestly admit to myself that while arguing with that young man, I had actually said many things that I wasn’t so certain of. I had said those things just for the sake of arguing. And deep down in my heart, there was something that happened that I didn’t really understand at that moment. But being wiser now, I would name it God’s Calling. At one point, I didn’t think anymore that God doesn’t exist, as I felt He was actually close to me. I had, after all, kind of grown up in a church, and therefore, I knew well how people come to accept Christ: people need to pray over you.

Finally, I had decided that I will ask friends to pray with me. But, at the end of the night, there was a song that we all sang together: „Forgive all my sins and wash me in your blood! Give me a holy mindset, new eagerness, and ardor!“ and suddenly I very clearly felt that my prayer had arrived in front of God through these lyrics that I had sung out loud. He had responded and received me. Then I just simply told my friends that I was “back.” It was followed by great joy and a lot of hugging. But I guess the most astonishing thing happened when I got home late that night. I went to my parents – who had already gone to bed – to share my good news with them. My mum responded that the same morning she had received an obvious answer during her prayer time: “No more need to pray for her. She will come.” That special day was March 23rd, 1973 and, my whole life as a believer stands on that. Who or what led me to accept Christ? I believe many people, intercession, and a smart “evangelism strategy” (building a bridge through singing) played a role. However, I believe that one of the prerequisites was definitely the fact that the way to God was already familiar to me. I just needed an invitation given at the right time and in the right way. I am confident that, for people who are not familiar with the Christian faith, their journey to accepting Christ might be very different. It might sometimes be long and curvy.

Translated to English by Merlin Metsla.