I would like to share an experience with you. I went to the US with my family in October 2019, and it was my first time to visit America. The main purpose of our trip was initially my husband Tarmo’s wish to see the skyscrapers. There was no huge excitement or extra high expectations before the trip. I personally would have preferred to see the southern States instead of big cities, though I wasn’t against seeing New York. As I was getting ready to begin our trip, I felt in my heart that I should take David Wilkerson’s book “The Cross and the Switchblade” for travel reading. It has definitely been one of the most influential books in my life. The events in David Wilkerson’s ministry took place in New York City, which is also why I decided to take this book with me. I was planning to visit Time Square Church (where Wilkerson served) or a Methodist church. I felt that I almost knew David Wilkerson through his books, and therefore I wanted to visit the church where he was serving. However, I didn’t have very concrete plans laid out, and I didn’t specifically search for information for that either.

New York City itself is rather thought-provoking – it’s a city where people build houses that reach incredible heights (it is a pursuit of reaching higher than clouds and other people in order to show the world its greatness and power), where there is wealth and glamour, but also poverty just next to it, and of course beautiful churches. You can see people who have come to New York from all over the world to find their luck. It can be difficult to find the right way and make the right choices in this babel. I found it hard to notice churches at first as they didn’t stand out between glitzy advertisements and skyscrapers.

On October 26th, after having already done some sightseeing, Tarmo and I had a bit different plans. Tarmo and his son Joosep went to the Aviation Museum while I decided to visit a store in Harlem neighborhood (it’s part of the city with deep African American cultural history). We had been in that area the previous day, and I had taken note of a place that I wanted to visit again. But once there, all alone, seeing homeless people and drug addicts, I felt a bit uneasy, and I started regretting going there after all. 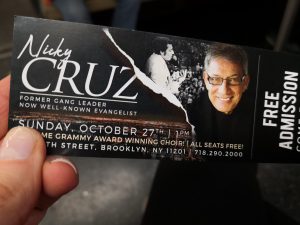 Nicky Cruz ticket handed to me on the street.

I was walking among the crowd, and suddenly a young man jumped by my side, handed me a flyer, and invited to a church service next morning. The former gang leader Nicky Cruz was going to share his testimony. My first thought was: “Oh, yes! Just last night, I read about Nicky, and it’s so great that he’s still alive.” The young man who gave me the flayer had never seen Nicky, but I had. Nicky Cruz came to Estonia in the 1990s to speak, and I was there in the audience. I even spoke with him briefly. My heart was filled with peace, and the decision regarding choosing a church for the next day was made.

The next morning was very rainy. Based on the flyer, it was hard to decide whether the location was a church or something else. We went through the rain that got stronger and found shelter. GPS did not function, and we couldn’t tell which way to go. Then after checking the address of the location, it turned out that we were standing in front of the right building. It was the Brooklyn Tabernacle church that hosted a normal service that day (not a crusade) where Nicky Cruz had been invited as a guest speaker for the first time in years. He doesn’t live in New York, and it had been years since he served in this church in New York, so it was like a homecoming to him.

As I was sitting and listening to Nicky’s testimony, I felt that God was very close. At one point, I started wondering when exactly did Nicky Cruz visit Estonia? I did remember the date because it was also the night when I gave my heart to God – I promised to walk with Him. It was October 20th, 1994. It was exactly 25 years (and seven days) ago. Twenty-five years with God, and I hear the same testimony! I was in awe before God, how He is leading us! BY SEARCHING ME OUT FROM THE 8 MILLION NEW YORKERS in order to give me the flyer and invite to the service which, as we later realized, was located on the other side of the city (distance is about 10.5 miles). 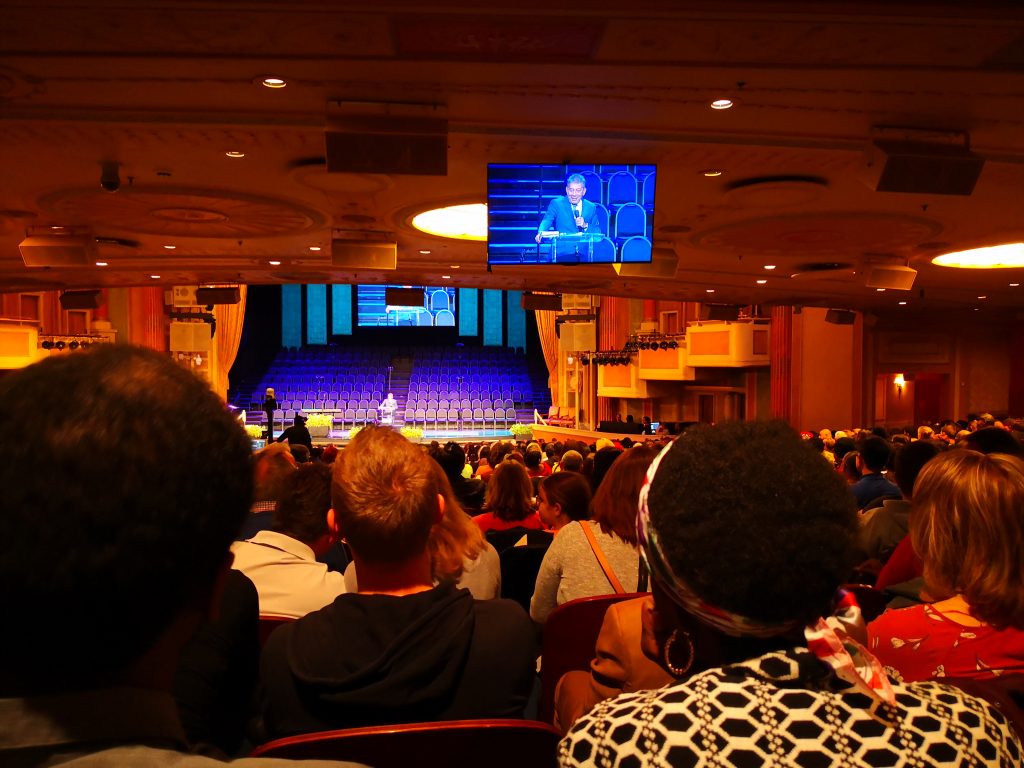 When I made my decision in 1994, no remarkable turn and change followed, which everyone would have seen. I was brought up in a Christian home, and this certain decision or promise has just been a firm assurance and encouragement during the times when I’ve doubted in my faith. Of course, more important than one decision is to walk with God and grow closer to Him. Maybe Nicky Cruz’s testimony has also impacted me so much because a few years after making my promise, I received a calling in my heart to do youth ministry in Võru. This was also a ministry with youngsters from broken families and kids who didn’t have any purpose in their lives. It wasn’t an easy job, and I certainly made some mistakes, but I did love these young people and the ministry. At times when I didn’t see results, I doubted whether I’m doing the right thing or am I even worth doing that. But now, years later, a number of those youngsters have gotten in touch with me again, and I can see the seeds that were once sowed.

I believe God wanted to show me how big and wonderful His plan is. The important thing is not to be in Nicky Cruz’s or a certain church’s plan but to be in God’s plan. While we see yesterday, today and tomorrow in our thoughts, He can show us our lives in periods of 25 years and provide an opportunity to give thanks for the journey with Him at a special service.

The sun was shining, and the weather was warm when we left the church (even though the weather forecast had predicted rain for the entire day). But even bigger was the gratitude in my heart.